MANASI KRISHNAVENI ESWARAPU
Modern Classical Greek Collection
For this project I was inspired by the colors, fashion, and textiles of Classical Greece (510 - 323 BC). I created a collection for a young audience who relates classic myths to their emotional experiences in the modern era. 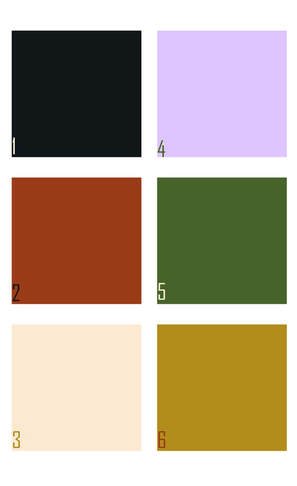 ​Color Palette
Colors 1-3 are inspired by Ancient Greek pottery, specifically the Covered drinking cup (kylix) with Apollo and a Muse. There are three main colors in it, a terracotta red, dull black, and a creamy white color (Covered Drinking Cup (Kylix) with Apollo and a Muse). These are the main colors in my collection with the other colors mainly used to the accent. Colors 4-6 all come from the saffron plant. Saffron was tied to feminity, a theme in this collection (Tortora 70). Color 4 comes from the flower petals and color 5 from the leaves (Still). Color 6 comes from both the stamen of the flower as well as the color of cloth dyed with saffron (Abbas). 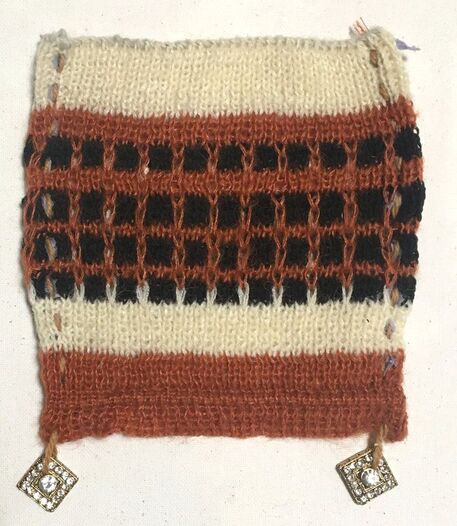 I started this project by thinking about what aspects of Ancient Greek life are relevant today, not just with dress, but also considering categories such as beliefs, agriculture, and religion. Through that process, I came upon Neo-paganism. Neo-paganism is the modern revival of ancient pagan religions. It’s a vast religious and spiritual movement that encompasses many cultures but is mainly based around and prevalent in the West. One subsect of Neo-paganism focuses on Gaia, the Greek Earth Goddess. In the original myth, Gaia arose from chaos and created the Earth. Then she made Uranus, her partner, as the sky to cover her, the Earth. Together, they had many semi-monstrous children such as titans and cyclopes. Uranus hated them and forced them to be hidden within Gaia which caused her pain and ultimately led to a rebellion against him. Today, Gaia can represent a celebration of femininity and connection to the Earth (Gaea). Within my generation, I’ve noticed a deep interest in Greek Mythology that seems to have come from Rick Riordan's Percy Jackson series. All over social media, there are posts exploring symbols and lessons from Greek myths. This collection is for a young audience relating classic myths to their emotional experiences today.
Half-Light depicts Gaia creating the Earth. I made a black ground the represent the chaos she arose from and her existence before Uranus, the sky. I colored her saffron to further tie her fertility to creation. The way I illustrated her was inspired by a pot, Bathing vessel depicting a bridal procession, where figures are shown elongated, in profile, with dark hair, and with the drape of their clothes being emphasized. Because the pot is from the classical period, I put Gaia in a Doric Chiton (Tortora 65). Lastly, there are dotted flower motifs throughout inspired by similar motifs on Plate with boar walking.
Colors 4-6 come from the saffron flower because of its connection to menstrual health and fertility in Ancient Greece. Women would wear saffron-dyed garments during weddings as psychological protection/prosperity as they entered married life and likely motherhood next (Tortora 70). In Blooming Creations I created motifs of saffron flowers. I related it back to the Gaia story by illustrating semi-monstrous hands reaching and grabbing out from them to represent Gaia's children. I aimed for the hands to complement the elegance of the flower’s movement despite Uranus’ disgust of those children.
Draped Pottery marries the two prints together by focusing on colors 1-3, inspired by Greek pottery. Pottery connects back to the earth in a less obvious way than plant life, so I thought the deep earthy colors would complement the lively saffron-inspired palette. The earthenware connects The whole piece is meant to imitate a pot. I did a guilloche check pattern and used the technical back as the fashion face because of the laddering effect that created color blocks. This was done to drawback to some of the geometric motifs found on Greek pottery like the decorative ends of the Bathing vessel depicting a bridal procession. This pattern also allowed the fabric to widen and then scrunch at the two ends where I did 1x1 rib to create the shape of a pot. For end-use, I thought this could be the end of a scarf which led me to add weights at the end like the weights added to Ancient Greek dress to improve drape (Tortora 65). This piece also uses primarily wool as that was one of the more prevalent fibers in Ancient Greece (Tortora 63). There is some cotton and polyester but that’s due to the limitations of the materials available.